Round the Bays is one of the world’s largest fun runs and among the 30,000+ runners was awesome Youth MP Thomas Swinburn, who ran to fundraise for Youthline.
The seventeen-year-old raised a massive $1200 to help support young people across NZ, a demographic he is currently preparing to represent.
Thomas is the Maungakiekie Youth MP for Youth Parliament 2016. He was especially thrilled to run alongside his mentor: the Associate Health MP Sam Lotu-Iiga.
When asked why he was running for Youthline, he said, “I wanted to support and help young people with mental health concerns. I wanted to show solidarity with young people coming up against these sorts of problems.
“One of the reasons I chose Youthline was because I wanted to support a local community organisation that have young people at the centre of it all.
“I really enjoyed supporting an awesome cause that makes a difference in the lives of countless young people.”
Thomas has been involved in other local community activities, such as encouraging young people to enrol to vote and helping at a visually-impaired community event.
He’s excited about helping Youthline:
“I’m inspired by the work of Youthline Auckland and wanted to support them by raising money as part of my participation in Ports of Auckland: Round the Bays 2016.” 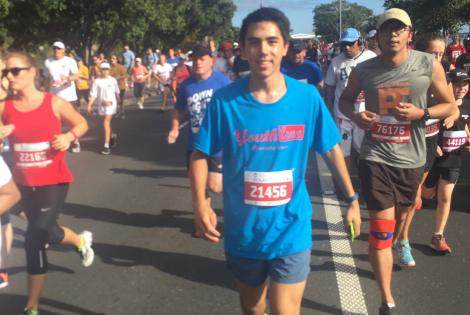